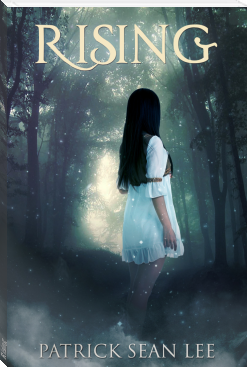 When Patrick Sean Lee sent us some info about his book, Rising, I was intrigued. The cover is pretty, the title is dramatic, and the first sentence of the blurb starts “In the spectacular and corrupt city.”

I wanted to know more.

But as I kept reading the blurb, I began to suspect that the story was suffering from an identity crisis. Or several.

But before I get too far into that, here is the blurb….

Who is this story for? Teens? Pre-teens? The word choice and language could go either way

The cover evokes an atmosphere of mystery and fairy-tale wonder, so perhaps the story itself leans towards coming-of-age fantasy adventure.The blurbs use of words like “spectacular,” “strange new land,” “massive branches of five-hundred-foot-tall-trees” create a kind of Narnia, Oz, or Alice in Wonderland sense of fantasy. The character passes through the veil from a gritty, harsh world to one of color and spectacular beauty and danger.

On the other hand, the opening (a corrupt city, a walled-in ghetto, caste systems) makes me think of political thrillers or sci-fi suspense adventures of the sort you see in books like Mazerunner, Hunger Games, Divergent, etc. Something that pits the character against an immense and unjust system.

A good rule of thumb for writing young characters for young readers is that your target reader will be the same age or a year or so younger than your character. If that holds true, readers of Rising will probably be in their mid-teens.  Kids want to read books that are “cool.” Be careful that the word choice is not narrowing your audience to the grandparents-only demographic.

Let’s assume we’re aiming for Teens. So first thing I’d do is…

Pruned down this way, the intriguing elements of the story come to the forefront. But a couple issues are also creep into the spotlight.

Issue: someone wants her dead?

So much time is spent on Alana’s trip to the island and why she was sent there that it’s really not clear what the story will be and what the main conflict is really about. No, we don’t have to know why someone wants Alana dead, but nothing in the blurb even hints that this should be a thing.

If a blurb takes the narrative approach, as this one does, each section of the blurb should connect to the next.

The link break down at #5. Something more needs to be said to connect this.

One of the ways a blurb can pull the reader in is to explain what is at stake. What is the point of the adventures? What’s at stake? Is it just plain survival? Is it about getting back home?

Is the story going to be about Alana’s adventures on the island, or her attempts to fight/unravel the corrupt caste system that sent her to the island? Should the reader be asking, “Why is she a special case? Is this a science experiment? Will she lead a rebellion against the injustices at home?” or should the questions be “How will she survive on the island? Who is her friend or foe there? Can she escape the island to go home? What is this place?”

To make me care, you have to tell me what the danger is.

And what we’re fighting for.

Do you have a pitch or synopsis that you’d like to send to the sacrificial altar? Email it our way  to canarypost@gmail.com with “Pitch Article Submission” in the subject.