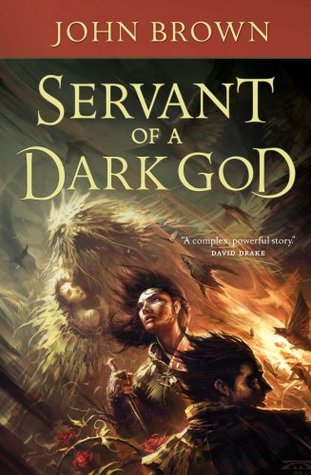 “A spirited blacksmith’s daughter accused of using the dark and terrifying sleth magic.

The young man who hunts her.

And the ferocious monster who only wants to be free.

Trapped in a web of lies and ancient secrets, of right becoming wrong, the three must struggle not only against each other, but also a being of irresistible powers, a creature who is gathering her servants to usher in the impending human harvest.

If the three succeed, they will save those they love the most. If they fail, the clans of the land fall with them. Thus begins the towering fantasy series that introduces an elaborate new world, a multifaceted system of magic, and a cast of compelling characters and creatures.”

The Dread: Oh. This is gonna be rough, isn’t it? What are the chances that the book will pull a delightfully fast one and the characters will all fail, the clans of the lands will fall with them, and the spirited blacksmith’s daughter becomes no more?  We should be so lucky.

My other worry: This is billed as the beginning of the series, but it sure looks like there ain’t no sequel anywhere in sight. What if I end up overcoming my yikes-reflex for epic fantasy? I’ll like it, and it’ll end on a cliffhanger, I just know it. “Temur, grandson of the Great Khan, is walking away from a battlefield where he was left for dead. All around lie the fallen armies of his cousin and his brother, who made war to rule the Khaganate. Temur is now the legitimate heir by blood to his grandfather’s throne, but he is not the strongest. Going into exile is the only way to survive his ruthless cousin.

Once-Princess Samarkar is climbing the thousand steps of the Citadel of the Wizards of Tsarepheth. She was heir to the Rasan Empire until her father got a son on a new wife. Then she was sent to be the wife of a Prince in Song, but that marriage ended in battle and blood. Now she has renounced her worldly power to seek the magical power of the wizards. These two will come together to stand against the hidden cult that has so carefully brought all the empires of the Celadon Highway to strife and civil war through guile and deceit and sorcerous power.”

That entire blurb makes me feel anxious. Too many names. I should read the prequel series. Overwhelmness.

Also: Why are the prettiest covers always on epic fantasy novels? I’ve had miserable luck with that genre lately. “As far as college freshman Brenda Morris knows, there is only one Earth and magic exists only in fairy tales.

Brenda is wrong. A father-daughter weekend turns into a nightmare when Brenda’s father is magically attacked before her eyes. Brenda soon learns that her ancestors once lived in world of smoke and shadows, of magic and secrets.

When that world’s Emperor was overthrown, the Thirteen Orphans fled to our earth and hid their magic system in the game of mah-jong. Each Orphan represents an animal from the Chinese Zodiac. Brenda’s father is the Rat. And her polished, former child-star aunt, Pearl—that eminent lady is the Tiger.

Only a handful of Orphans remain to stand against their enemies. The Tiger, the Rooster, the Dog, the Rabbit . . . and Brenda Morris. Not quite the Rat, but not quite human either.”

I hate, hate, hate student main characters. It’s a hatred born of a long list of literary disappointments and artsy, sensitive college-aged heroines who make me want to chew through my reader tablet charging cord. The sight of the word “student” in a blurb almost always means the book is an auto-discard.

I used the word “almost” there because, oh gosh, that cover. Maybe the Chinese culture element will make up for the inevitably insufferable and useless Brenda? The word “orphan” doesn’t fill me with much confidence, either.

Do you have an auto-discard trigger? What is it?