Circle of Fire by Keri Arthur 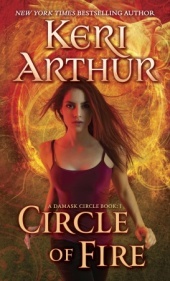 Here’s the thing, Canaries. I want a book to rile me up. I want to be excited about an unexpected twist, angry about how bad it is,  or gnashing my teeth over some stupid decision a character made. But in between the good, the bad, and the unforgivably bad books, there’s another genus of books – those that are merely pleasantly lukewarm.

That’s kinda this book: a good read, generic backdrop, a plot about Dark Pasts, Evil Sorcery, and Angry Magic Serial Killer, and the usual romantic misunderstandings culminating in a true-love happily ever. I read Circle of Fire over a few enjoyable hours, and I have nothing much to say about the experience. Maybe, “It wasn’t bad”? or “the story was okay”?

The overall set up is intriguing. We get Madeline Smith. Her sister thinks she’s crazy, her brother-in-law thinks she killed her husband, and Madeline is beginning to suspect that she’s finally gone crazy. Maddie’s being haunted by a ghost. Except this ghost claims to be real, and that if Maddie doesn’t help him, he’s going to die and a serial killer is going to go free.

It’s a good start – plenty of family drama, a traumatic and mysterious past, and a deathly looking (but rather handsome) hero in distress calling Maddie to action. Understandably, Maddie’d rather hide away in her house than listen to the ravings of a bloody ghost that just might be all a figment of her imagination. But when her nephew is the next child to go missing, Maddie’s got to leave her house and find the ghost before its too late.

It’s a pretty good set up. Mileage will vary depending on whether you dive into this as an urban fantasy/suspense novel, or if you come at it from the paranormal romance angle. Romancers, you’ll probably enjoy this more. Suspensers? You’ll probably have to grit your teeth a few places. The villains are creepy, the characters’ emotional reaction to the rollercoaster that is their life is enjoyable, and the pacing is solid.

Though all the the characters are in their late 20’s (or early 30’s? I wasn’t sure), there is definitely a young adult feel to the book (was it the easy writing style? Simple action-story formula? or the fast pacing?). A friend-fan of Keri Arthur’s other writing had also informed me that this series is the author’s early work and that it only get better from here, so if you’re intrigued but hesitating, try her later works.