I officially (and arbitrarily) dub this month of January Space Opera Month. And by Space Opera, I mean fun-adventures-in-space-with-cool-female-characters-(though-awesome-guy-heroes-are-welcome-too)-and-romance-and-drama-and-witty-conversations. And space.

What that means for you, canaries, is that for the foreseeable future, theCanaryReview will be theSpaceCanaryReview, and all things shall be awesome and scifi.

I launched my holiday break with Peacekeeper by Laura E. Reeves…and came away with mixed feelings. That’s two-canaries mix of feelings. 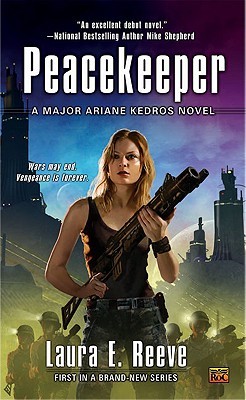 I’m gonna start with the stuff that I loved (AllCapsLOVE). For one, main character Ariane Kedros has a dark, dark past. None of that nonsense about personal trauma or a bad relationship. During a war fifteen years ago, Ari piloted the ship that fired a superweapon and wiped out an entire solar system. She has a new identity now, but if the truth ever came out, she’d be tried for war crimes – if she survived that long, that is.

When I first read the premise on the back of the novel, I sat back and thought, Oh my. How are you going to pull this off? And I knew then, that this book was going to either really, really, intensely good. Or a complete flop.

Reeve handles the story with a deft hand. Ari’s past slowly comes into focus, her relationships, the pseudo-blackmail hold her army ex-commanders still have on her, her alcoholism and fears of discovery…and it all comes to a head when she discovers that other members of the mission are being assassinated, one after another. Oh and there’s this peacekeeping assignment she has to juggle that forces her to rub elbows with the people whose solar system she destroyed once upon a time, except maybe she didn’t.

Ariane is refreshingly human in a genre that often opts for bright flash over grit. I loved it! Oh, and the aliens in the book? They were, well, alien. In that wonderful, not-human way.

But reaching into the mixed feelings bag, past my utter delight over the way Reeve brought the little details of the peace negotiations or those of the crazy future of social media to life, I get to the stuff that made the canaries fly the coup.  I dove into Peacekeeper excepting this to be all Ariane, all the time. Turns out, I get something a lot closer to epic political scifi/murder mystery. Jumping around three different points of view means that for at least a fourth of the book I’m stuck following Tom-or-whatever-his-name-is, not Ariane, and not the intriguing Edones. This means I spent one-third of the book wishing Tom would trip and fall out of an airlock.

It also means the story and character motivations are spotty at best – okay, if you take it all in as you read, but it breaks down once you pause to figure out why certain things happen, how come she gets tortured, and what are the flashbacks for and why flashbacks why?

All in all, mixed bag.

UPDATE. It’s about a week later, and I’ve come to the conclusion that I will yes absolutely read the sequel because I have to find out if the solar system Ariane is supposed to have destroyed is actually all kaput dead and gone. It was going to be four months in-book until they find out. That means they have to find out in book 2, right? Right?

Some more scifi? Yesplease. Check out these plotlines:

Do you have any space sci-fi/space opera recommendations for me? Comment!