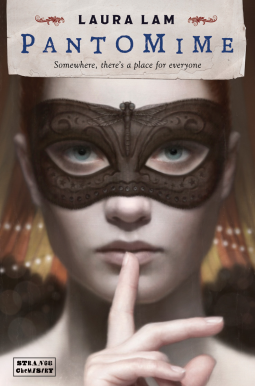 I can’t even talk about this book. Every time I try to write this review, I immediately go into fits of sputtering rage. The whole story hinges on a single twist, one that, if revealed, ruins the gut punch of the book. But the twist is also what makes the such an unexpected and utter joy to read. I have never read a hero like that presented in Pantomime. And it’s left me positively aching for more.

This is where I would talk about the book, but I pretty much can’t. No plot, no characters, nothing. I’ve never been so utterly vexed by a review before. I’ve also never felt so compelled to not talk about a twist in a story before, because I can’t stand the idea of ruining it for even one person. (Except Canary the First, who never gets the privilege of spoiler warnings.) So I’m just going to drop the official blurb in here so that I don’t slip up and reveal anything myself:

R. H. Ragona’s Circus of Magic is the greatest circus of Ellada. Nestled among the glowing blue Penglass—remnants of a mysterious civilisation long gone—are wonders beyond the wildest imagination. It’s a place where anything seems possible, where if you close your eyes you can believe that the magic and knowledge of the vanished Chimaera is still there. It’s a place where anyone can hide.

Iphigenia Laurus, or Gene, the daughter of a noble family, is uncomfortable in corsets and crinoline, and prefers climbing trees to debutante balls. Micah Grey, a runaway living on the streets, joins the circus as an aerialist’s apprentice and soon becomes the circus’s rising star.

But Gene and Micah have balancing acts of their own to perform, and a secret in their blood that could unlock the mysteries of Ellada.

The blurb does not do the book any justice. First time author Laura Lam accomplishes more in this slim (278 page) text than many authors manage in a book twice that size. She deftly handles both Gene and Micah’s timelines, giving just enough hints for readers to put together the truth before it’s laid out in the open. She also builds a wonderful world, plopping us right in the middle of Ellada – and more importantly, Ellada’s myths.

My single gripe is a bit of a drag about three-quarters into the text, but it is only a tiny bit slow and is overshadowed by just how damn clever Lam is about the whole story. And by the time the killer cliffhanger comes around, any memory of pacing problems are long forgotten.

In the end, Pantomime presents us with an entirely different hero in the ultimate coming of age story – but how do you come of age if you don’t even know whose age you’re coming into?

That last bit doesn’t make any sense without context. So, canaries, you all need to read the book so that you have the context so that we can talk about it without all this secrecy.

I’ll give the book three months from the publication date – February 5 – until I do a more in-depth review without all this dancing around the plot and characters. In the meantime, get your wings on this book and read! You will not be disappointed.